Baie Fine (pronounced Bay Fin)  is a scenic 7-mile east-west running freshwater fjord that is a very popular destination and is located on the western edge of the Killarney Provincial Park. The shores are lined with a continuous range of white quartzite hills of the South LaCloche Range that can rise to 800 feet above the water.  We went to the Pool by going through a 2 mile-long narrow passage that leads to a dead end, called the Pool.  The Pool is possibly one of the most scenic anchorages in all of the Great Lakes and the tall rocks at the entrance give them their nickname, the fjords of the north.

We entered the Baie Fine Channel with some tricky navigation.  They are called the Fjords because you are about 15-20 feet from the solid quartz cliffs as you sail in relatively deep water.   It really is kinda cool but as with all the places up here, it requires some tricky zig-zag navigation.  I could not really take too many pictures because I was on Rock Watch.  What that means is that I stand on the bow and yell Rocks!!!!!!!    So we don’t hit any. 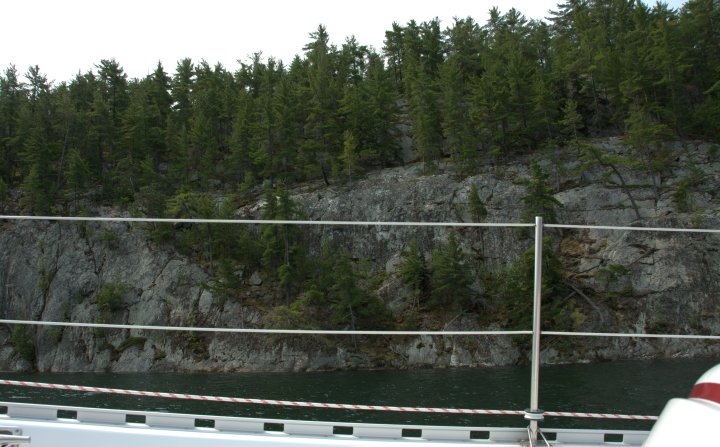 We were following a 62-foot sailboat in front of us that was sailing into the channel.  We thought that he had been here before as we did not dare to sail in.  At one point we passed him as we motored on down to try to find a nice little nook to anchor in.  We did pass one popular spot by Marianne Island but it seemed full so we ventured on.

Towards the end of the channel, we decided to anchor.   There was a good stiff breeze blowing and we knew if we stayed here it was not ideal. There was some trepidation about entering the final narrow channel to the pool.   We took out the dink and the fathom line and motored towards the entrance of the final channel.  We rowed back and forth dragging the line until we found the low spot.  Shawn hit MOB on the GPS and we were good to go.

As we returned to the boat, we were approached by the owner of the sailboat that sailed in.   We noticed that he went down the channel and he came to tell us that it would be ok and deep enough for us to get to the pool.   We thanked him and ventured in.

It is a lot narrower in this part than we had anticipated and we had decided we would not go to the pool and would try to anchor at an inlet at near the entrance.   After a failed anchor attempt, too many boulders, and nothing to grab onto,  we plunged onto the pool.   It was well worth it as the pool is very sheltered and quite lovely.   And there were only 5 boats anchored leaving us plenty of room.  We dropped anchor and despite the depth finder telling us it was only 3 feet, we knew there were a lot of weeds below us and plenty of water for us to float.   Luckily there are no really huge tides on the lakes like there are on the oceans. 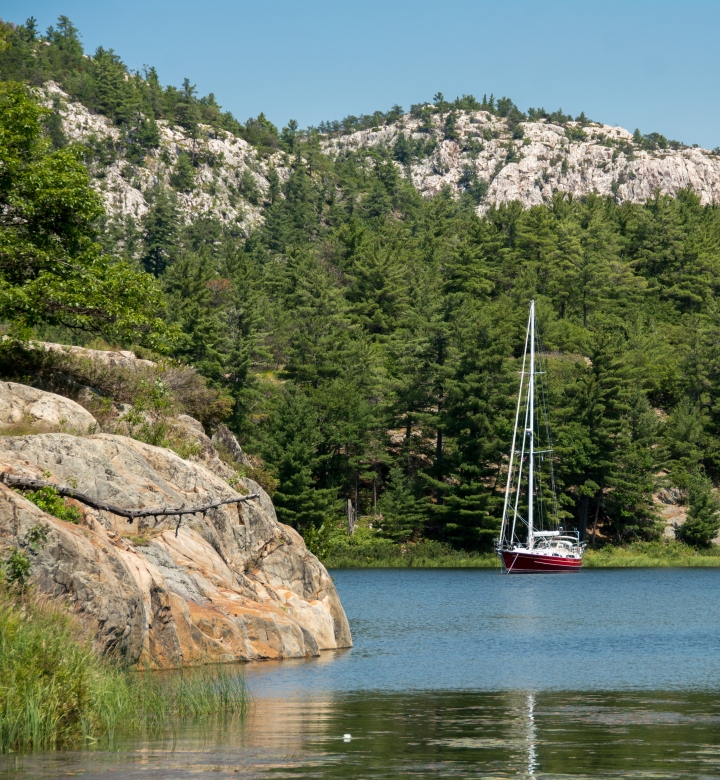 Our newfound Canadian friend came over for drinks and told us about a trail up to Topaz Lake.  He also showed us his boat.  Scott is a man in his mid 60’s with 2 daughters, an ex-wife, and a girlfriend.  He had been sailing to the Pool since he was a kid which explained why he was able to sail all the way in.  His boat was a 65′ 1983 sailboat from Finland and was very cool.   Needed some updating inside, but very comfortable.   It even had a soaking tub!  AND a washer and dryer.   Almost full-sized.   Also, I have never seen such a large galley on a sailboat.  We agreed to meet in the morning and he would show us the trail.

We woke to a beautiful morning and looked forward to our hike.  After getting in the dinghy we motored over to a small dock and beach where we tied up.   One book that we had said to follow the jeep trail.  Scott led us up that trail until we saw the markers.  They were very cool trail markers.   They were yellow (for the trail we were on) and they were in the shape of a circle.  One part of it was an arrow sticking out so that it could be pointed towards the trail you are meant to follow.  Pretty sturdy plastic, easy to see and I wish they were everywhere! 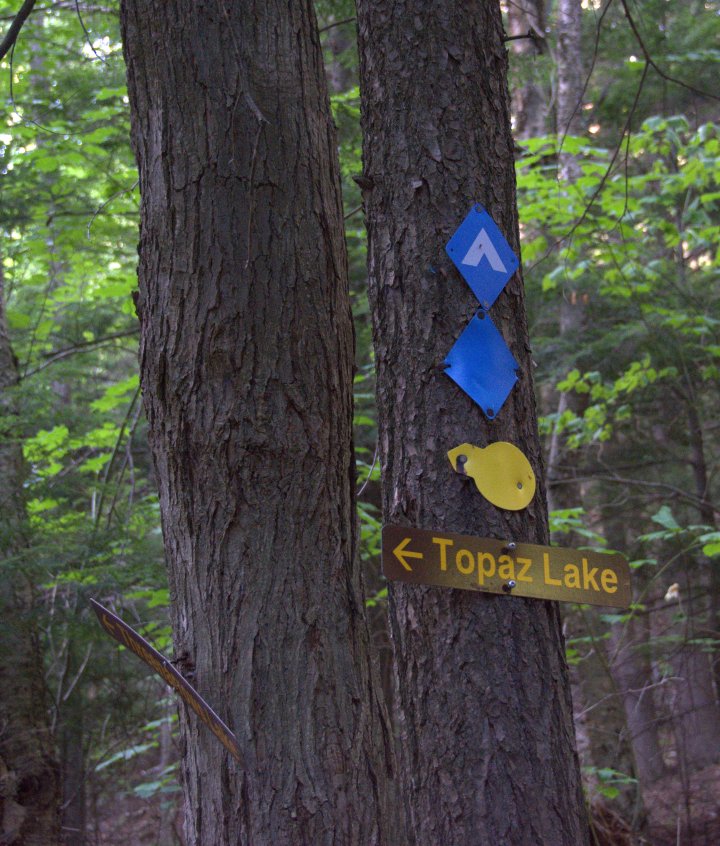 Our walk up to Topaz was through a beautiful forest with the now permanent smell of pine.   The bed under the trees was soo soft that you could walk silently through the forest.   Luckily we were making some noise as this is a home to both bears and moose.  We walked uphill through the trees and suddenly we could see the green water ahead.   Up on top of rocks looking down the lake was very serene.  Except for the family that was dipping in the water, wringing out some clothes, and filling their water bottles with filtered lake water.

A couple with their two grown kids and girlfriends/spouses (not sure) had been camping for a few days out in the park.  They had been coming there for years and they were having a great time.   I have not camped in years so it was fun to see all the cool new camping gear that is available.  It is now soo much easier to get water than ever before!   Just pump…and pump… and pump…and in about 15 minutes you will have enough water to fill a water bottle.   I have to say that drinking green water….just seems wrong. Well, time to jump in.   The water was actually pretty warm, very green, and not incredibly clear.  You could see your feet but not much further than that.  And that is ok with me.  Never know what is lurking below in the green water…..I think I read too much Stephen King.

With just a quick jaunt up the hill from the lake Scott showed us a beautiful overlook.   From here we could see the Pool and where we were anchored. Our picture even made the Cruising shot of the week!  Such a grand site.  And bonus…Blueberries!   I did find a rather large patch that appeared to be untouched.   Oh yeah.   We need to come back for more.

Back to the boat for lunch, nap and listen to the quiet around us.  We returned to get more blueberries and watch the sunset from the lookout point.   Took some pics of the boat with the setting sun on it.   Very nice.

Earlier in the day I had seen some canoes just pop up out of nowhere so on the way back to the boat we decided to row down this little opening in the grass to see where it would lead.  It was very quiet and very…swampy. Very narrow and had several logs almost all the way across.   We kept on rowing until we came to the end.  We found the canoe portage site!   It is a real trail.  Who knew?   With a gentle waterfall into a pond and the sun was almost gone it was really quite beautiful.   But, sun setting means incoming darkness so we hustled to get out of the swamp before nightfall.   Amazingly enough, there were no mosquitoes.  None.   Kind of weird.