The planet is full of strange and wonderful things that are explainable, but still hard to believe.  We found a place like this in Moncton.

Leaving Quebec City to our next destination, we saw a sign for a covered bridge.  Well, what is not to love about covered bridges?   And since we were in need of a quick break we got off the highway and followed the signs 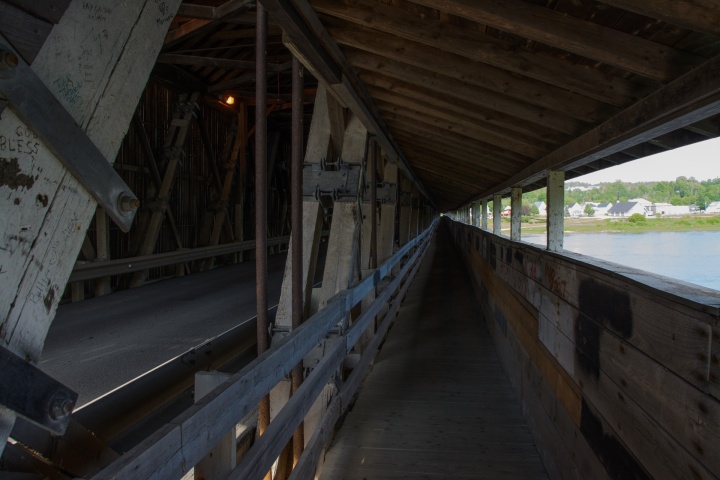 Hartland Bridge is the world’s longest-covered bridge crossing the Saint John River.  Like many covered bridges in New Brunswick, it is a “kissing bridge.” Kissing bridges date back to the years of horse and wagon traffic, when young men “trained” their horses to stop about halfway across the bridge, then the couple shared a couple of kisses and continued to the other side of the bridge.  When it was covered in 1922 the local ministers declared it would corrupt the morals of the young people.   We drove over the bridge, it is one lane, and there is no time for stopping!

We arrived in Moncton where we stopped for one night at the Magnetic Hill Vineyard B&B.  The delightful hosts  Janet, Jeff, and Zack Everett welcomed us even though we arrived when they were about to break ground on a new tasting building.  They would have a separate building to accommodate more people and they were excited to start.

The house we stayed in was an old home from 1867 that was owned by a hoarder that passed away and the house went to the state. When the Everetts bought it, it was covered in birch bark preserving the original siding.   They raised the house up, fixed it up inside and out, and had a nice little tasting room in the lower basement level.  They even kept the barn which is a nice place for gatherings.

They make wines from fruit-rhubarb, strawberries, blueberries, and even cranberries. We had a nice tasting and bought one bottle.   They also had maple syrup and I bought some of that.  It is the best!

The B&B is located on a local attraction called Magnetic Hill.  Now, this is a rather strange designation for a hill and you pass by a few giant magnets to entice you to visit their one spot of fame.   So we drove a bit down the hill from the B&B, in and around a little road up to a gate.   It was $6 Canadian to get in so we paid it.   Not sure what we would see, we were told to keep going until we see the supervisor at the top of the hill and she would tell us what to do.   Luckily, there was no one else there and we drove right up.  She asked if we had been there before and we said no.  We were then to drive down the hill to a white pole on the left, put the car in neutral, and keep our hands on the wheel.  OK.   We did that, took my foot off the brake and we started to roll backward UP THE HILL.   I just started cracking up.  It was truly the dumbest thing but I could not stop laughing all the way up the hill.   We gradually rolled to a stop.   Was that it?  Yup.   $6C to roll up a hill backward.   Best money spent for the day!