New Plymouth is a coastal town and we finally had some good weather to actually see the coast.   The sand is black here due to the volcano, Taranaki, that hovers in the background over the whole area. The mountain reminds me of Mount Fuji and it was used to provide the backdrop for the movie The Last Samurai.   It has not erupted in a while, but the prediction is that it will in the next 50 years.

Walking around the neighborhood where we were staying we noticed more modern homes that we have found so popular here in NZ.   For a country founded in 1840, New Plymouth in 1842,  there are very few older homes that we have seen outside of Dunedin.  And what is not to like about an elephant house??

Along the waterfront, there is a bike/walking path that takes you from cows to a water park.   The place we were staying had a few bikes that we could borrow, so we picked out two, and off we went.  We headed towards the cows first gliding around flowers, fences, and rocks.  We saw in the distance what looked like giant dinosaur bones, but turned out to be a bridge.   In fact, it was the Te Rewa Rewa Bridge.  The bridge is located where there was a battle during the Musket Wars and the site is a burial ground, called Rewa Rewa.   It frames Mt. Taranaki, considered sacred by the local indigenous people, and was finished in 2010.   It is quite a beautiful bridge and I would have liked to see Taranaki with snow on the top framed within the bridge. 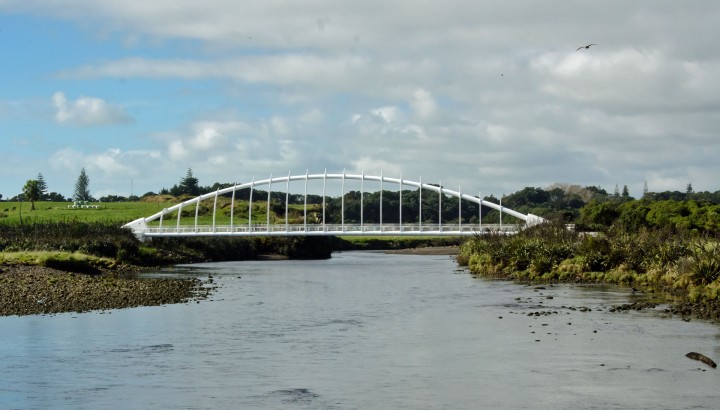 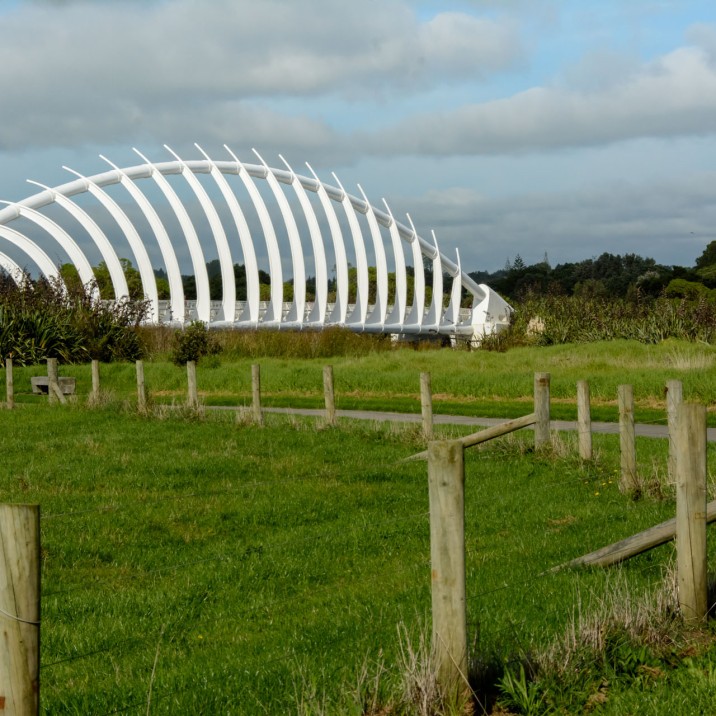 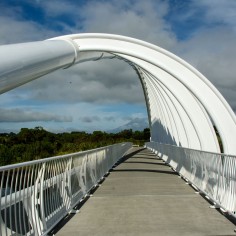 As we rode along in the other direction, there were several areas where we stopped to watch the surfers.  We had seen several walking from their homes in the area, in wetsuits, boards, and bare feet.  They are a persistent lot!   The waves were not huge or long but they were enjoying themselves.   We really had fun watching one guy on a paddleboard.   He would paddle up to a wave coming at him and if he was lucky, when he was at the top he would turn his board around and surf.   A different way of surfing that we had not seen before. 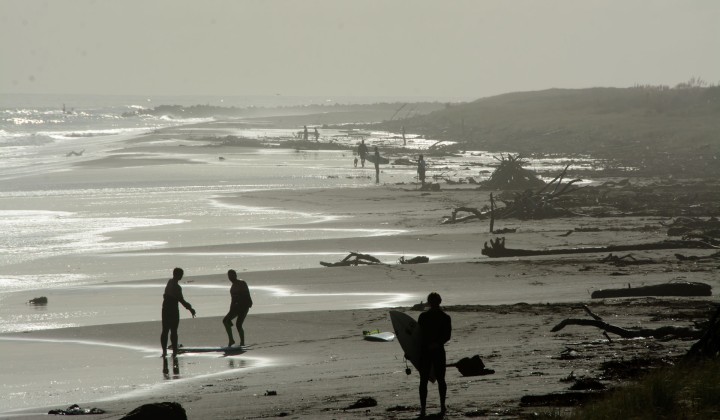 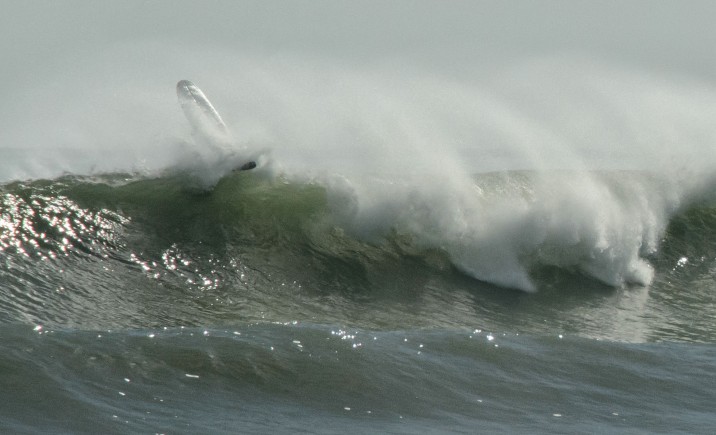 I loved seeing everyone from the younger kids to the older man, looking on in remembrance of the days that he surfed those same waves.  You did get a sense that he really wanted to be out there!

After a quick ice cream break, we decided to try riding on the beach as the tide was all the way out.   The beach was very hard so we did not sink unless we just stopped, then the slow sinking began.   It was a lot of fun and we noticed that we had missed a horse riding along the beach.   Would have liked to have captured that!  The sun was setting and it was a beautiful location.

Overall, the town was a nice quiet beach town that probably swells in the summer to at least twice its size.   The volcano attracts many visitors in the winter as it is supposed to look awesome with snow on the top.   We now take a long drive back to Auckland where we hit…traffic.   Oh wow.   Forgot all about that.   Guess I will miss being so far out and away.   The city sounds are a true assault to the senses, but they do offer a sense of vibrancy. 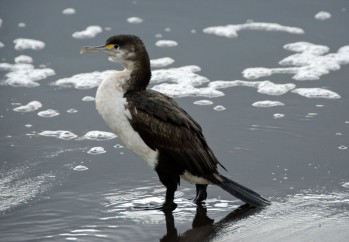 We leave the wonderful land of New Zealand and are off to the island of Tahiti where we will check out the island for a few days before we leave for our cruise around the Polynesian Islands.  We are sad to go but I look forward to relaxing on a sunny beach!

2 thoughts on “Surfing in New Plymouth”