We had this modest little cove to ourselves for the night as it is only good anchorage if the wind comes off the land. We felt that the winds would hold steady so we dropped anchor. There was a small beach across from the anchorage so we dinked over to check it out. We walked up the hill to see the surrounding area and had a great view of our anchorage as well as Brett Rock in the distance.   The grass is so high here-a clear indicator that there are no sheep on this rock. 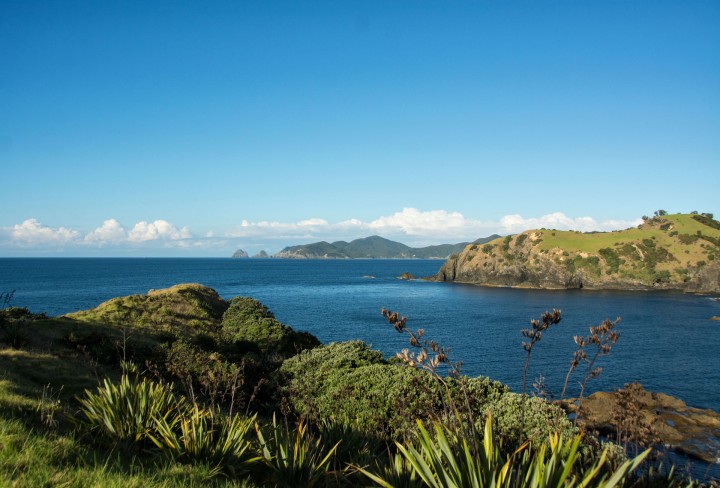 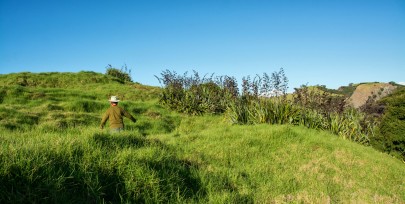 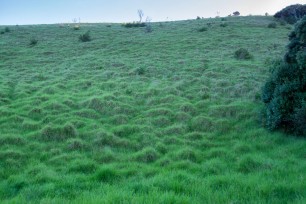 The beach was Collected some interesting shells on the beach, while always looking for glass. Found some brown pieces then white and green. Always hope to find that elusive blue glass! Shawn does not understand the idea of walking on a beach and looking for shells. I told him it was the gathering instinct that all women have.   It is also the thrill of the hunt-oh what goodies will we find today?!

The air is so clear along the coastline. With the light winds blowing you can smell the scent of the forests, a bit of the sea, but mostly just…clean. It is so refreshing to take in a deep breath of air and not sneeze or feel like you are inhaling something that is falling off a tree or sprouting out from a flower. We have been able to see long distances, mountains in the backgrounds that are so far away. It is a very energizing feeling, just to breathe. I can see why Captain Cook wanted to stay here after his discovery. 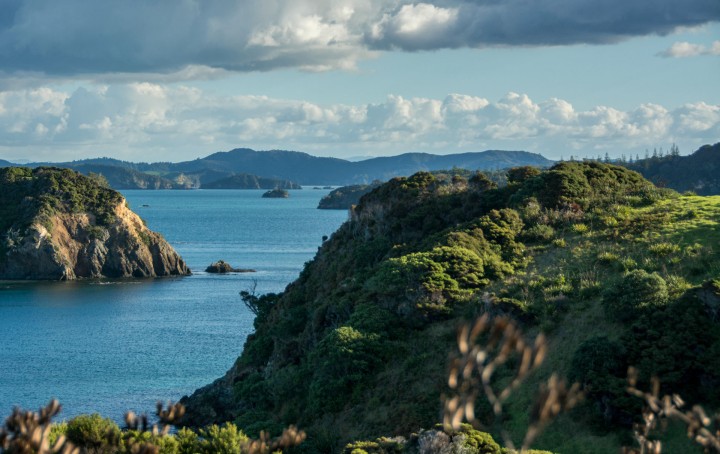 The sea color here is a deep blue, with many shades sparkling under the sun. Where the sun hits directly on the water from above, it is a deep turquoise/green and allows you to see clearly for 20 feet or more below to the bottom. As a cloud passes over it turns into a deep blue that is almost navy, but closer to royal blue. The deep blue sky reflects down on the calmer days, changing the hue yet again. With all the white birds flying around on land and sea, the view is never ending and more calming than you can imagine.

I can understand why many take to the seas to live. On the good days, you sit back at a beautiful anchorage, have some wine, cheese, crackers and olives for lunch and watch the wildlife. Take birds, for instance. There are many seagulls, aka flying rats, near any body of water. While in general they can be a nuisance, they are also fun to watch. They seem to enjoy landing on our dink, and the first one to approach always lands on the motor. It is the highest spot and we call that first lander the general. If anyone comes by and tries to knock him off, a whole lot of squawking goes on until someone is left standing on the motor. Most times, it is the original gull! If he allows it, the challenger is allowed to stand on the boat sides, sharing space. Sometimes another comes down and three of them share. Not sure why they like to stand on the dink but they make for some fun pics.

Another bird we have been watching is a loon like bird as it dives under water and swims quite a ways. We usually try to guess where he will surface and can get in the general area. Sometimes they elude us completely and we have no idea what happens to them. This morning as we watched the mists swirl about, one of these birds popped up right next to the boat. Not sure who was more startled, him or me, but by the time I was firing the camera on him he took off flying. They are a pretty bird and I hope to capture a good shot of him.

Despite all this talk about birds, I am not one who jumps at the chance to visit an apiary or walk into one of those chickadee cages. Birds landing on my head or flapping their wings at me just creep me out. Thanks Mr. Hitchcock! There is only one bird that I have come to like and his name is Echo. I even have the honor of bird sitting for him occasionally. We understand each other-I feed him, and he does not try to flap his wings at me when I put food into his cage. We whistle back and forth to each other and all is good. Taking pictures of birds from a distance is a lot more fun.

So far we have only seen birds. We have not seen any whales ( a bit late in the season) dolphins (no clue where they are) or sea lions. We did see some blue penguins coming to the surface as we motored by, but they did not come too close to the boat. We hope to see some penguins when we get to the south island.  Which will be by plane, not boat! 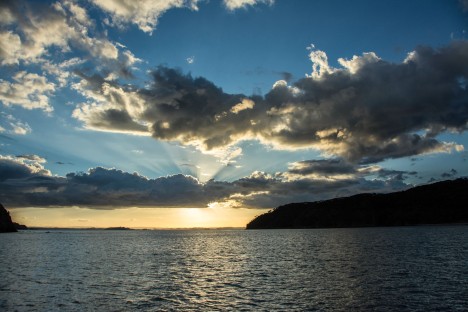