Imagine looking upwards at the night sky and seeing millions of shiny lights, blinking on and off in some mysterious code, or just at random.   Imagine looking at the horizon and seeing a light so bright you think it is a halogen light only to realize that it is Venus, a planet so far away.  Imagine the darkness surrounding it and the air so clear you feel you can see all the way to the other end of the universe.  This is a night we rarely see and it is spectacular. 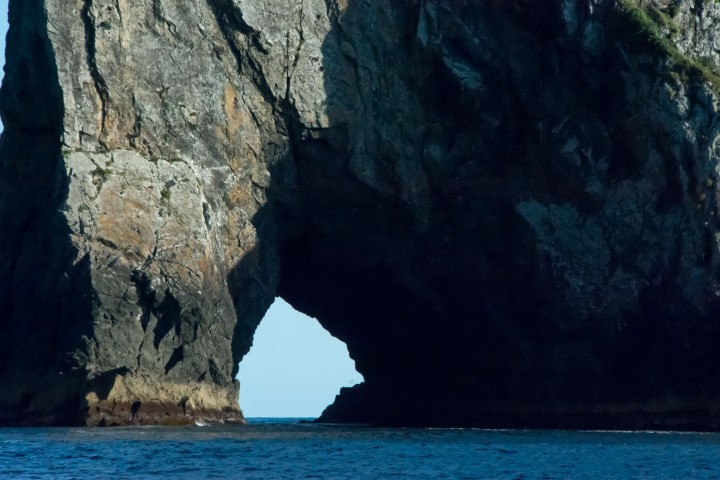 The wind today was light and we were heading into it so we motored and added a sail occasionally if the wind shifted.   We were heading to Whangamumu Harbor, a place that is nestled in the middle of more hills and rocks.   We traveled around a huge rock island just standing off shore, Brett’s Rock, also known as the Hole in the Rock.   We could not sail through it but it would have been fun to be on a small fishing boat and fly right through it!

Up on the gentle slope of land across from the rock, Cape Brett was a lighthouse high up on the hill that has been there since 1906.  The house was at the bottom, close to the sea and I imagine the caretakers were in great shape walking up to light the lamp every night!  This is the only lighthouse managed by the Department of Conservation that still has its internal workings and you can take a hike to go and visit it. 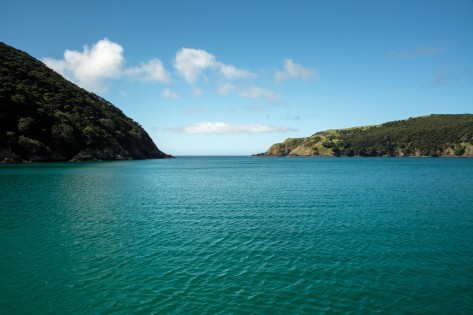 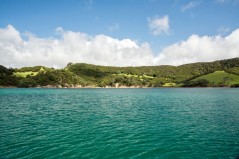 When we arrived at the harbor, we were delighted to see that we were the only ones there.   Solitude!  It is very unusual to find yourself in a harbor by yourself so we were going to kick back and enjoy this to the fullest.

First, we went ashore.   This is an old whaling port where they brought in whales that had been slaughtered to harvest their blubber from the late 1800’s to the 1940’s.  The Whangamumu Whaling Station was the only one in the world that caught whales with nets, and it was the longest-running and most successful station on the North Island of New Zealand.   There are a few stands of info around showing pics of the men working with the whale carcasses or standing on the dock with 50+ barrels of whale blubber and whale oil.  The original boiler still remains as well as some of the vats used to cook the meat off of the bones.   That fat would rise to the surface and be removed by hand.   The bones were used as fertilizer.  It was a sad place and, as Shawn said, there were many lost whale souls here.

After walking around, we headed back to the boat for dinner and a sunset.   It was a nice one and we enjoyed the peace and quiet and watching the seagulls.   As the night sky darkened, we were in awe of the beauty….only to be interrupted…by a fishing boat!   Grrr!   So much for quiet.   It was a small boat with 2 guys on it and they anchored a wee bit away from us, but they were fishing with bright lights and it did kill the mood a bit.  Oh well.   We were still able to see the sky and there was quite the entertainment with shooting stars, figuring out what was a planet, and trying to imagine anyone counting the sheer number that seem to hang just out of reach.

What could possibly top this?   The sunrise tried very hard, but the stars win.   Have you ever seen the sky without city lights?