After a rather uneventful flight we landed at 7:00 am on a Monday.   We left on a Saturday so we lost Sunday completely.  Or we just slept through it. 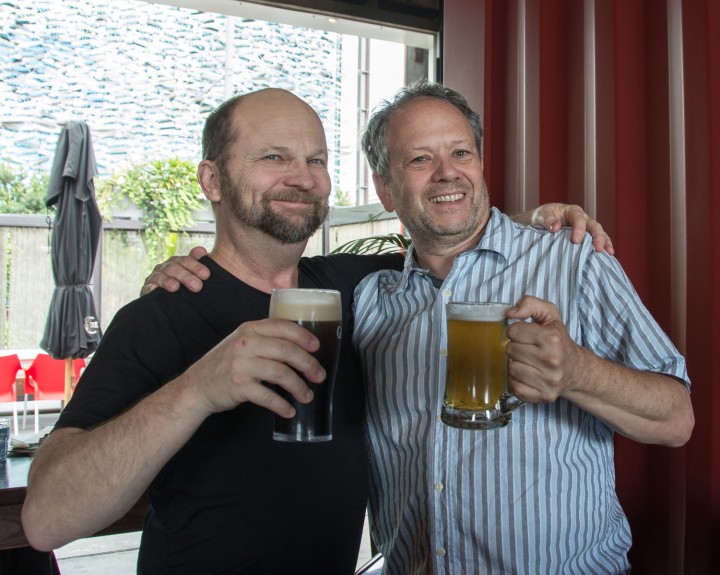 Shawn’s fraternity brother Mike, who we haven’t seen in 30 years (yikes!) was very gracious and picked us up from the airport.   He brought us back to his awesome California-looking apartment and let us enjoy a quick rinse-the-plane-yuckies-off shower.  We also met his girlfriend, Jana.  So nice and beautiful!   We sat around and chatted awhile while trying to figure out how to call internationally from our phones.   Not as easy as you think!

Before we came we did do a bit of research.   There were a few areas we wanted to see, one of them being Crater Hill.   Since it was just a quick walk from the apartment we decided to go now and Jana led the way.   Right out of the apartment is a steep street climb.   Whew!   You can tell we live in a VERY flat state as we were huffing and puffing at the top. How high is a crater??

This is a lovely area of town with a mixture of apartments, houses, and industrial.   A walk through a town is always interesting as there is always something different to find that you do not have at home and yet, everything is still somewhat familiar.

On the way to the path to Crater Hill, we walked through a children’s park that was fairly new.   They even had a zipline!   Oh yeah, went on that.   Would have done it a few more times but I was with others.   Bummer.

We started the next ascent by walking upstairs. (Glutes! Quads!)  Stone stairs and Jana bounds up them with ease.   This is good practice for us but boy, it was humid!!  The climate here is very similar to California along with the tropical palm trees.  We entered the park by way of a dog area and Jana told us this was the prettiest way up.  I am sure my now-gone Caesar would have loved this park.  The fence was low enough that he would have jumped right over it and kept on going.   He always did enjoy a good run. 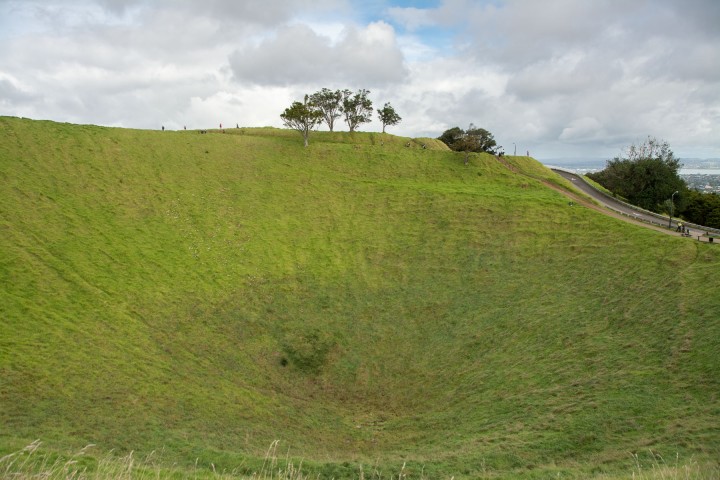 Jana was right.   This was a beautiful walk. The walk up to Crater Hill was very green and lush.   The trees through here were awesome.  I love a good tree and these would be very scary at night.  Very Middle Earth!  Soon we see the crater and it is huge! It is called an explosion crater and I guess we are in a volcanic field that seems to cover at least half of Auckland.  Jana said there are supposed to be 11 craters.   Wow.   Glad they are all dormant.

The cool Compass thing at the top showed us different directions of where the cities were located and how far they were.

The view from the top is an unusual one in that it is a natural hill that gives you a 360-degree view of a big city.  No need to go up the Sky Tower which is very similar to the Needle in Seattle.   I guess if you really wanted to go up the Tower, you can choose to hurl yourself off, as in bungee jumping.   Nope.   Like my feet on the ground.

After returning to the apartment, we called our Auckland B&B place and talked to our host, Pat, and he said we could bring our baggage on by.   What a lovely and elegant place!   Right on the wharf area overlooking all the crazy boat traffic.  Beautiful spot to spend two days on their balcony.   Very private and a commercial wharf is very active giving you a never-ending change of scenery.  After showing us the ropes, we head on out again,  but not before Pat shows how to get CNN on the television in case we don’t want to miss anything that Trump has to say.  Ha!  Funny guy.

Cool library on the wharf made from shipping containers!

After dropping off the bags, Mike and Jana joined us as we headed out to lunch.   We were so close to the wharf it made sense to find a restaurant down there.   There are quite a lot to choose from.  The whole area has been revamped with restaurants and on this warm holiday (Easter Monday) there are a lot of people out   It is in the heart of downtown with the Sky Tower just a few blocks away.  As you start your walk down the wharf, there is a great view of the mega yachts that are in the marina.   Mega is the keyword here.  They are just so big!   100 feet is not unusual.  This is also where America’s Cup boats come to hang as well.  But since this is the end of the season (going into autumn here), there are fewer boats.   Now, to find an owner and beg for a sail……

We found a nice restaurant/bar called the Jack Tar, rated rather high on Yelp and with good reason.   Yummy lunch, good Kiwi wine, and we were entertained by a guy who had a dancing skeleton.  Eating outside and watching the world go by….all around a good meal with new and old friends.

Mike was feeling under the weather so we parted ways.  He did let me borrow his fisheye lens so I hope to have some fun with it.   Never used one before so not sure what I can do but he showed us a great picture of the Milky Way that he had used the lens for.  Cannot do that on a boat-moves too much-so hope to use it on the south island. 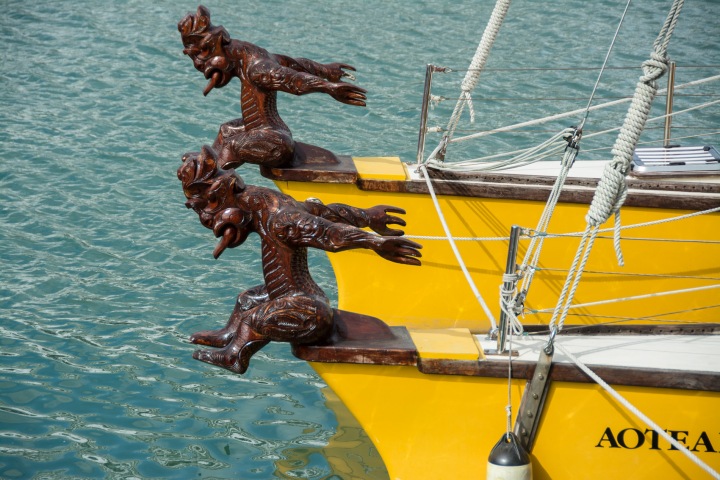 At the beginning of the wharf is a Mariner’s Museum.  Our trip would be incomplete without a visit to one of the classic here-are-a-lot-of-boats-and-fishing-guys-stories-in-one-building kind of place.  Nice museum with a touch of the Maori People and their boats.

Next stop-ice cream!  Cannot resist a taste of NZ’s finest and it was good.  They have a national flavor-the Hokey Pokey.   Creamy vanilla base with butterscotch and caramel bits, so what is not love?  We will be back I am sure.

As we headed back to our B&B, we noticed that the buildings located on the pier all look like cruise ships.  It was designed that way and many apartments are on the upper floors while the first floor remains retail.   We passed many little restaurants on the ground level, all with outdoor seating overlooking the bay.   The hosts were very friendly and all had a smile and a pleasant greeting as we walked past.

We arrived at our B&B door, which is in one of the cruise ship-looking buildings.   We were able to get right in with our magnetic key, walked into the elevator, and scanned our key again.   We pushed our floor number (6) and nothing happened.   As with all jet-lagged people we did it again 3 or 4 more times.  And yes, we had the same result.  The next thing we know, the elevator opens and a couple walks in.   They scanned their key and yes, it worked.  But they were on floor 3 which did not help us and they did not have a clue why ours did not work.  Now we are stuck on floor 3.  Try scanning the key again, and yes, still not working.   Then another guy comes in and tells us we are in lobby 1.   We need to be in lobby 2.   Really?   Yes, there are two lobbies that look EXACTLY the same.   Geez.   Jet lag-blaming it on that.

Our delightful hosts Cheryl and Pat had prepared a few appetizers and some good New Zealand wine and chatted with us about where we were from and what we are doing.  Strangely, despite the jet lag, we were able to keep up a decent conversation. We really enjoyed the city lights from the balcony as we sipped our wine.  Slowly, we fade even more into jet lag.  After our conversation, they gave us a suggestion of a pizza joint downstairs where we could get a decent pizza to go.   We decided to do that and ate outside on the deck, overlooking the city and wharf.

The sun was setting in the west but earlier I could not figure out why the sun was in the wrong place.   Or so it seemed.  In the northern hemisphere, the sun is in the south all day in the winter as it tracks from east to west.   Well…..we are south of the equator and the sun is tracking across the northern sky.   Reeeeally had me confused.   It is a bit like driving on the left side of the road.  Just strange and a bit unsettling.  Jet lag was killing us so off to bed we went.

Oh…one more thing.   The one thing they do NOT have in NZ is squirrels.   Really.   But I did manage to find some.